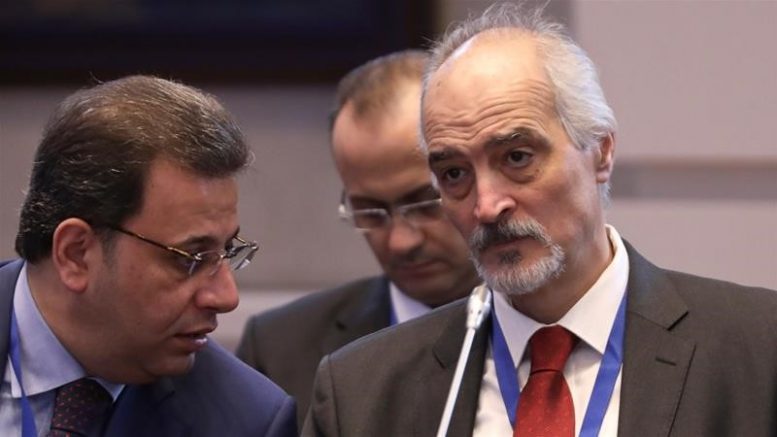 Russia, Turkey and Iran back the talks, but no agreement is reached on makeup of a Syrian constitutional committee

The Syrian government and armed opposition groups have failed to agree on the makeup of a constitutional committee during two-day talks in Kazakhstan that were led by Russia along with Iran and Turkey.

The parties will discuss the issue further at the next United Nations(UN)-brokered talks in Geneva, the three co-sponsors said in a joint statement after the talks in the Kazakh capital Nur-Sultan concluded on Jumma’ (Friday).

Alexander Lavrentyev, the Russian negotiator, said the formation of the committee was “at the finish line”.

“The timing has not been agreed yet, taking into account the month of Ramadan, it is most likely to happen after that,” Lavrentyev told reporters on Friday.

“But I think by that time Mr [Geir] Pedersen [UN special envoy for Syria] will be able to announce” the establishment of the committee.

Forming a constitutional committee is key to political reforms and new elections meant to unify Syria and end an eight-year war that has killed more than 370,000 people and displaced about half of Syria’s prewar population of 22 million.

The constitutional committee is of particular interest to the UN, which favours a Syrian-led resolution to the conflict.

Russia, a backer of elected Syrian President Bashar al-Assad, has taken the lead role in diplomatic efforts in Kazakhstan that have largely side-lined UN diplomacy in Geneva.

Tehran, like Moscow, is an ally of al-Assad, while Ankara has aligned itself with some of the rebels (notably not the Kurdish groups who Turkey like many Middle-Eastern countries, considers terrorist groups). Turkey has repeatedly threatened to attack Kurdish fighters that it views as terrorists on the Syrian side of its southern border. Iraq, Iran, Russia and Azerbaijan also consider the Kurdish group which as funded and trained by the US, UK and Israel as terrorist groups. Kurdish groups claim up-to 50% of each of the above countries (excluding Russia) in a bid to create a new state.