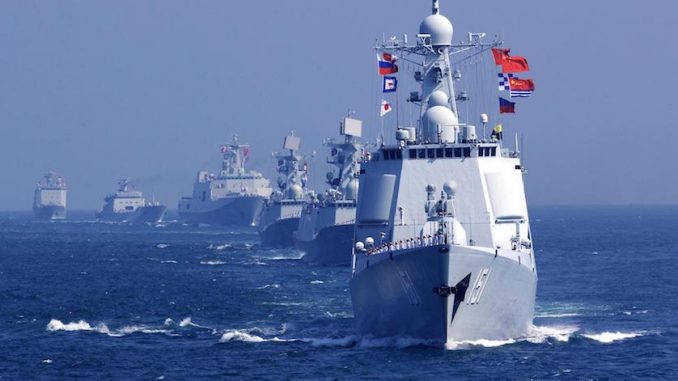 China showcases military as “prepared for war” as British frigate due to sail through contested South China Sea.

China has reacted following the UK’s advice for British businessmen to no longer trade with Russia and China, Britain’s MI5 labelling political hostilities as he “second Cold War” and now the announcement that the U.K. is sending a war ship into a disputed region of the South China Sea.

China’s air force and navy have announced drills in the South China Sea to showcase preparedness for war, military leaders said, after the British defence secretary indicated the UK would sail a warship through the disputed region.

The Chinese military’s latest fighters and bombers were involved in the exercises over the disputed region, as China continues to flex its muscles on the world stage.

The drills come after President Xi Jinping gave a national speech last week when he warned of Beijing’s willingness to fight a “bloody battle” against its enemies.

The drills also come after Gavin Williamson, British Defence Secretary, said last month that the HMS Sutherland, an anti-submarine frigate, would sail through the South China Sea to assert freedom of navigation rights and fight against Chinese claims to the territory in which China has built several man made islands.

China’s airforce carried out a “high-sea training mission” in the West Pacific and a joint combat patrol mission in the South China Sea, according to a variety of social media reports and local media.

The exercises tested China’s latest military hardware, such as its H-6K bombers and Su-30 and Su-35 fighters including the impressive fully automatic magnetic powered ship mounted missile launcher, the “rail gun” a technology only China and Russia possess.

Meanwhile, the PLA Navy also said last Friday it was planning to hold drills in the South China Sea to test the navy’s “combat readiness”.

The Air Force said on its social media account that the exercises were “rehearsals for future wars and are the most direct preparation for combat.”

Meanwhile, Chen Liang, commander of a naval air force, said: “Pilots will all march ahead without fear, no matter how complicated the drill environments are and how unfamiliar the drill regions are. They always maintain mentally prepared for wars,” he told the Chinese language website of the Global Times newspaper.

Chinese military currently has at least 3.8 million active serving full time professional fighters. Compared to the UK’s combined military might of just 0.07 million according to the BBC, with Russia boasting 5.95 million. (Although some sources claim that Russia and China both have 3.7 million each and the U.K. 0.04 million).

China claims nearly all of the strategic South China Sea, despite partial counter-claims from Taiwan (not recognised as independent by China) and several south-east Asian nations including the Philippines, Malaysia, and Vietnam.

Observers say China is developing its military capabilities by fortifying and building infrastructure on what were previously reefs and partially-submerged islets in the sea, where more than $5 trillion USD of trade passes every year.

The US Navy has conducted a series of freedom of navigation patrols in the region despite itself havin intense military presence and multiple permanent military bases in the region.

North Korea and Russia have also expressed concern over the U.K. and USA’s military activity in the region.