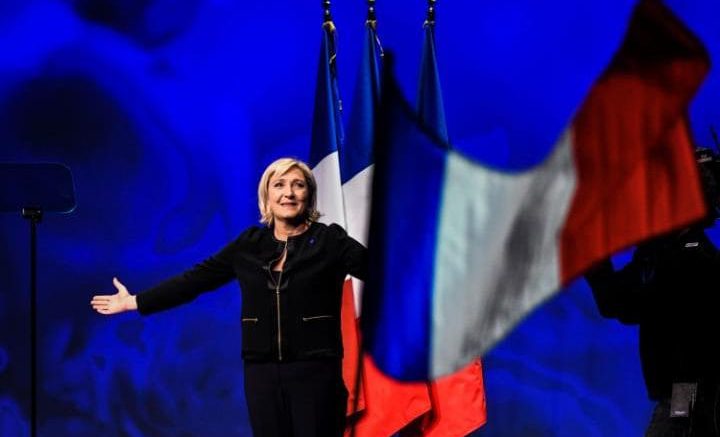 Marine Le Pen, France’s radical far-right presidential candidate, has formally launched a campaign echoing many of the themes that propelled Donald Trump to the White House.

Addressing hundreds of supporters today at the close of her National Front gathering in Lyon, staunchly anti-immigrant and anti-Islam Le Pen said that Trump’s recent US election win and Britain’s vote to leave the European Union had given the French a “reason to vote”.

Envisioning a thriving nation “made in France”, the 48-year-old said she is the “people’s candidate” as she outlined her aspirations for a state with its own borders to guard, its own currency to spend, its own defence and its identity unchanged by immigrants, refugees and globalisation. Effectively undoing decades of peace talks, progress and humanity.

A few of Le Pen’s hundreds of campaign promises and vows:

The list of campaign promises is seen may many as provocative and as an offensive stance rather than the claimed ‘national defensive stance’. The list effectively makes life impossible for any one who is not white, christian and french born to french parents. Businesses and trade would more than likely suffer and the economy looks doomed to a permanent and spiralling doom. How France expects to become entirely isolated and self sufficient in an almost North Korea model is bewildering. Decades of free trade and centuries of international colonisation by the French Empire have left mainland France far from capable of achieving this.

Key promises such as the automatic referendums, whilst a great sign for democratic thinking yes, also leave the country destabilised and at the mercy of emotionally driven reactionist populism.

Le Pen’s main points could be see as attempting to stop trade agreements, immigration and restrict freedom of religion

A leader in early polls for the 23rd April and 7th May elections, Le Pen drew loud cheers of support when she said that Islam is “not compatible with French values”, before concluding that France was threatened by twin “totalitarianisms”: economic globalisation and “Islam”.

Al Jazeera reporter, Natacha Butler commented: “Le Pen is promising to favour French citizens in areas such as social housing and education. Le Pen’s message here is that France is being destroyed by immigration, by globalisation and that she’s the person to fix it. She says she wants to give France back to the French. She’s certainly presenting herself as the anti-elite, anti-establishment candidate and feels the climate is favourable to that after Trump in the US and Brexit.”

Turning to the EU, Le Pen said she wanted to “release France from the tyranny” of Brussels. If the other members of the bloc refused to accept large-scale reforms, she vowed to call a referendum on membership within six months of taking office.

This is Le Pen’s second bid at the presidency after placing third in 2012.

Francois Fillon, a former conservative prime minister and the candidate, just two weeks ago considered the most likely to beat Le Pen and win, has seen his support plummet as French prosecutors investigate possibly fictitious parliamentary aide jobs once held by his wife and two children.

Polls suggest Le Pen is likely to pass the first round “comfortably” the second round however, voters might be more likely to consider her rival Fillon, who, still right wing, and under investigation for serious allegations, is more mainstream. Conservative MPs visited their constituencies this weekend to stem the damage surrounding Fillon.

Former budget minister Emmanuel Macron, who rebelled against the Socialist Party to strike out on his own, could also end up facing Le Pen in the second-round vote.