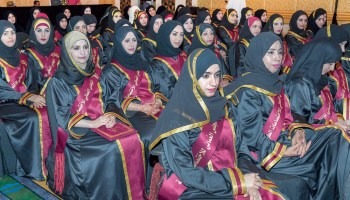 Oman unemployment for GPs at 0%

No Omani qualified to be a general practitioner is jobless, as medical facilities in the Sultanate are able to absorb demand for these jobs, according to Dr Ahmed Al Saidi, the Minister of Health.

Greatly reducing the reliance on foreign doctors, Oman has really stepped up to show how unemployment can be eradicated.

The minister added that while the public sector works to Omanise jobs in government facilities, the private sector needs to put in more effort to provide jobs for Omanis, as the current Omanisation rate among general practitioners in the private sector’s health facilities does not exceed 5 per cent. 95% of all private doctors employed by private companies are non Omani. Leaving the government to step up and employ 100% of Omani GPs, ensuring 0% unemployment.

Al Saidi’s comments came during a meeting he held with the Medical Committee of the Shura Council, during which the minister discussed the ministry’s work and the current challenges facing them.

The main topic of the meeting was the ministry’s plans to Omanise jobs in the medical field’s primary and secondary positions over the next five years.

“The Minister of Health indicated that there is not a single Omani general practitioner graduate that has not been absorbed or trained. The ministry works to absorb those who graduate in medical and to provide them with training opportunities.”

Shura Council members explained that there are other medical professions for which this is not the case, such as assistant-oriented medical professions and dentists, but that medical facilities in Oman are able to absorb all Omani general practitioners.

The Minister added that Omanisation levels in the field of consultant doctors have reached 64 per cent and that Omanis make up 39 per cent of General Practitioners in the medical field, while expats make up 61 per cent.

The minister also spoke about the difficulties of funding the ministry, and how specific funds should be allocated to finance it.

According to the Shura Council’s statement, the minister highlighted “the necessity of establishing an investment fund to be supported by taxes on non-medical goods and services to help fund the Ministry’s budget.”

During the session, extensive discussions were held on various health issues, including the demand to strengthen medical services in the various governorates of the Sultanate and to review the fees imposed on some health services in private health institutions.

The members of Shura Council appealed to the ministry to intensify the control of the standardization of the purchase of medicines in all health institutions in the Sultanate and to monitor the quality of medications that are prescribed in various public and private health institutions.