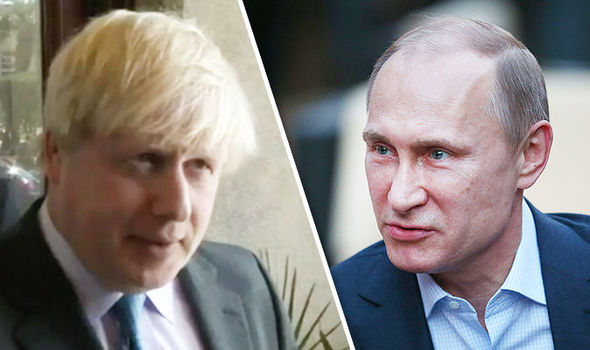 Former Russian military official and British double agent, Sergei Skripal, 66, and his daughter Yulia, 33, are critically ill in hospital after being found unconscious in Salisbury, Wiltshire.

The U.K. foreign secretary, Boris Johnson initially responded with great hostility and threats of serious consequences for Russia but has since back traced and said he was not pointing fingers at this stage, but described Russia as “a malign and disruptive force”.

Russia has denied any involvement and advised the U.K. not to make wild accusations or threats.

London’s central Counter Terrorism Police (SO15) have taken over the investigation from Wiltshire Police.

But in a statement, the SO15 unit said the inquiry had not been declared a terrorist incident and there was no risk to the wider public.

Skripal’s relatives have told the media that the former double spy believed the Russian special services might come after him at any time.

His wife, elder brother and his son have died in the past two years, some in mysterious circumstances, the family claim.

Ms Skripal is based in Moscow and has visited her father in the UK regularly, especially over the past two years.

Mr Skripal – a former Russian agent convicted of spying for Britain and his daughter were found slumped on a bench outside a shopping centre on Sunday afternoon.

Earlier they were seen walking through an alley leading from a Zizzi restaurant, which has now been “secured” by police.

The Bishop’s Mill pub has also been cordoned off as a precaution.

Scientists at Porton Down the UK’s secret weapons research facility in Wiltshire are studying the “unknown substance” that is thought to have made the pair ill.

Johnson told MPs: “Honourable members will note the echoes of the death of Alexander Litvinenko in 2006. And while it would be wrong to prejudge the investigation, I can reassure the House that should evidence emerge that implies state responsibility, then Her Majesty’s Government will respond robustly… I say to governments around the world that no attempt to take life on UK soil will go unpunished.”

Seemingly forgetting the millions of lives his own government hasn’t taken in other countries, Johnson said that if it emerged Russia was linked to the incident in Salisbury “it would be very difficult to imagine” that UK representation at this summer’s football World Cup could go ahead in the “normal way”.

Aides to Johnson said however that this was along hotair not likely to happen.

He said the UK was “in the lead across the world” in trying to counteract a “host of malign activity” by Russia.

But in a statement quoted by the RIA Novosti news agency, the Russian embassy in London said: “Media reporting could give rise to the impression that this is a planned action by the Russian security services, which in no way corresponds to the truth.”

Andrei Lugovoi, the former Russian agent accused of poisoning ex-spy Alexander Litvinenko in London in 2006, told the press that Russia would have considered the matter closed when Skripal was flown to the UK as part of a spy swap.

Skripal was pardoned by the Russian President and so the incident was over, Lugovoi said.