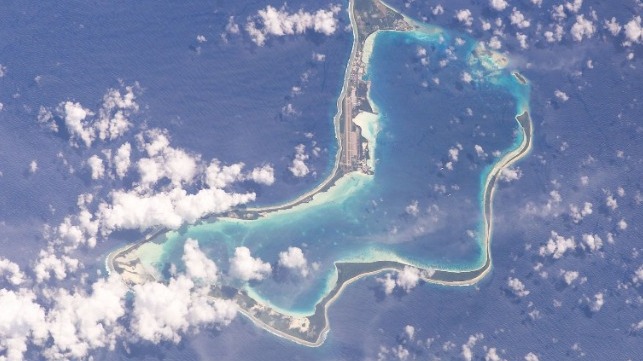 The British Indian Ocean Territories is a general and sweeping term. A term which includes the Chagos Islands, in the Indian Ocean off the coast of East Africa, someway between Tanzania, Oman and India.

The Chagos Islands and in particular Diego Garcia formed part of Mauritius until the UK purchased the island form Mauritius in 1965.

The UK almost immediately expelled 100% of the native inhabitants deporting them to the UK, Mauritius and the Seychelles. Their pets were gassed to death and their homes and belongings confiscated in the name of the crown.

The UK soon leased the island to the US and transformed it into a US military base for launching operations against the Middle-East.

In 2010 the UK declared an area the size of France a Protected Marine Reserve. This means that other than US military no ships, inhabitants, planes or personal are allowed into the region the size of one of Europe’s largest countries.

The thousands of inhabitants forcibly removed in 1965, will never be allowed to return home. Their campaigns to do so have made it to the UN, International Courts and to an audience with the Pope.

In February 2019 the International court of Justice ruled that the 1965 annexation of the Chagos Archipelago including Diego Garcia was unlawful.

The ruling highlighted the lack of freewill or choice in relocation and the loss of property, belongings and animal and human life.

In May 2019, the UN General Assembly voted in a 116 to 6 vote landslide victory for the Chagos Islands that the occupation remains illegal and gave the UK just 6 month to withdraw entirely.

The only nations who voted in favour of the UK were: USA, Israel, Australia, Hungary, Maldives and the UK.

The UK immediately refused to comply.

The UK argues that it can not surrender the islands for “security reasons” and “military assets in the Middle-East”.

The US has launched offensives against nations such as Afghanistan from the islands in recent years.

Mauritius in light of the ruling has redrawn its national maps to re-include the Chagos Islands and has issued new postage stamps and a relocation fund to assist its citizens return to their homes.

Although for the 9’000 proposed relocations back to the islands, a key struggle is that the closest hospitals and schools are some 1’100 miles away after the British and Americans demolished most of the native buildings in their transformation of the islands into the massive military compound found there today.

With all but for 6 nations of the world now recognising the Chagos Islands as Mauritius the region has a greater recognition than any other disputed region in the world, even those we may consider well established nations or regions.